Learn the history of The Insurance Man and about our current staff.

Follow us on LinkedIn for tips and information beneficial to business.

Wayne Runkles opened the insurance agency doors on March 01, 1976 with only a card table for a desk, manual typewriter, phone, and help from his wife Linda. A man of great respect and integrity, Wayne’s business philosophy was work hard, treat people with honesty and fairness, and be helpful.

Wayne was a 1963 Texas Tech graduate. He started his insurance career at Travelers as a commercial underwriter in Lubbock, Texas. He left Travelers in 1968 to work for an independent insurance agency in Midland. After eight years and a lot of prayer, Wayne ventured out with his own agency.

He named the agency “The Insurance Man” because it clearly references what service is being provided. Much like “milkman,” “mailman,” or “auto repair-man.”

In June of 1976, Rita Bradshaw came to work for Wayne while Wayne’s wife, Linda, took over the agency’s accounting duties. Business had grown to the point that Wayne brought on John Underwood, a former Travelers underwriter of 9 years, as a partner in April of 1978. The Insurance Man added “& Associates” to the name as a result of this partnership.

Jess Ellis, a former Travelers Commercial underwriter, joined the agency as a producer in 1987. Jess was an educator, computer-savvy, and advanced the technology within the agency. He was a partner from 1990 and returned back to Travelers in 1997.

Unfortunately, in October 1995, Wayne Runkles was diagnosed with cancer. With this news, Wayne decided to work part-time so he could try and fight cancer while enjoying his time with family. November 21, 1998, Wayne went to be with the Lord and his wife of 39 years, Linda, became a partner at The Insurance Man & Associates.

Upon receiving his own news about cancer, Larry Crawford decided to bring on an experienced producer, Ray Irving, in 2003 to take his place at the agency. Ray Irving brought his 17 years of insurance experience from Federated and became a partner of the agency with John and Linda when Larry went to be with the Lord in 2004.

After 32 years at the agency, Linda Runkles retired in 2008. She currently lives in Levelland, TX and enjoys spending time with her children and grand-children. John Underwood retired 6 years later in 2014 and is currently enjoying his time hunting at his ranch, traveling with his wife, Theresa, and spending time with their children and grand-children.

Brandy Greenleaf joined the Insurance Man in 2007 bringing 6 years of experience in the insurance field. In 2014 she became the Vice-President of the Company and continues to serve in that capacity today.

Brandy and her husband Andrew were married in 2007. They have three children; two daughters, Emery and Madelyn, and one son, Connor.

In 2014, Ray Irving became President of The Insurance Man & Associates.

Ray and his wife Joy were married in 1980. They have two married daughters, Megan and Blair, and two grandsons, Jackson and Beckett, who all live in Midland. 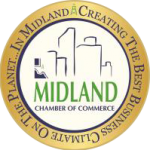